Although significantly higher employee retention, lower absenteeism and higher turnover are projected for the coming year, Dowding Industries also places great emphasis on the personal development, attitude and direction of its employees so they can learn about and leverage their strengths in life, as well as in the workplace. 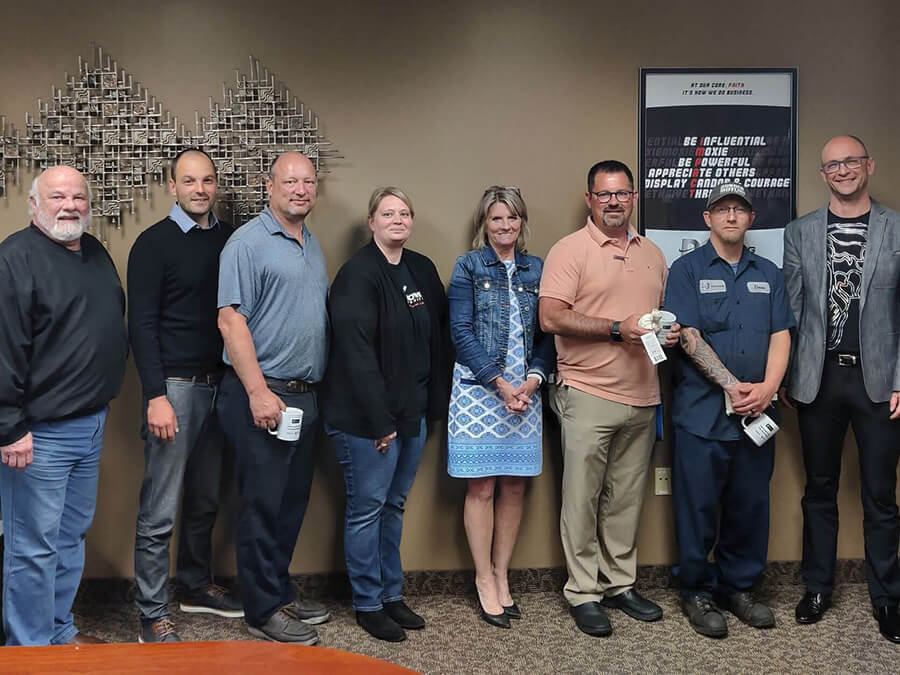 The challenge: Can improving communication across the whole organization lead to better collaboration among employees?

Dowding Industries, a manufacturing organization that makes parts for products built by Caterpillar, Kubota and Cummins has always been a company that cares more about its employees than its products. When the company was founded in the mid-1960s, there was an approach from the beginning to treat all employees with dignity and respect. As with many manufacturers the ups and downs of the economy, employee retention and absenteeism the company has at times, struggled over the years.

Recently, the leadership at Dowding has implemented new approaches to manufacturing that gave them a higher level of efficiency and effectiveness, but they still wanted to see a more lasting impact and were moving in that direction and then the pandemic came and slowed things down. As with many organizations, employees experienced frustration and even isolation during this time. In part, it was due to the circumstances but also the lines of communication from supervisors had weakened. That, coupled with the ever-changing landscape of manufacturing, brought about many questions and concerns. The biggest challenge was to improve communication at all levels of the organization, especially among leaders, who had not yet learned about the important tools needed to close the communication gaps. As a result, overall cooperation and collaboration was low and it was difficult to maximize the potential of the company. The goal of the leadership was to work together to develop a high level of trust built upon open and honest communication and collaboration. In addition, through the use of Clifton Strengths the vision was to leverage the talents and strengths of each individual on the team.

The process: learning how to communicate and collaborate while leveraging strengths

Approximately 75 of the 220 employees of Dowding Industries, Eaton Rapids, Michigan, had taken Clifton Strengths. When Covid struck the scheduled training was put on hold. Finally, the e2grow High Performing Team (HPT) program was rolled out with the “Launch Pad” team and the utilization of the e2grow growth culture app. The initial results of this first program were not as strong as anticipated or desired. It was something new and time was needed to assimilate the concepts and put them into practice. However, the company leadership decided to initiate a second HPT program with the “Customer Service and Shipping Team.” The program for this team was completed with very good results. Efficiency and effectiveness were increased due in part to the initiation of weekly meetings and ongoing conversations regarding duties, responsibilities and collaboration.

These first two teams that experienced the HPT program are situated on the front and back end of the manufacturing work taking place at Dowding Industries. When an order is received (front end) the part to be manufactured is engineered and designed by the “Launch Pad Team”. This team passes the design along to the plant managers who distribute the work to the appropriate employees for production. Upon completion (back end) the “Customer Service and Shipping Team” makes certain the part is delivered to the customer on time. The process from beginning to end is exceptionally complex with many challenges presented due to numerous adjustments or changes called for during the manufacturing. All of the complexities of manufacturing will tend to exacerbate the communication process unless the team leaders decide to work together in the most efficient and effective fashion.

As sometimes happens with a growing company, old patterns of communication and collaboration become obsolete which was the case at Dowding Industries. Executive leadership decided that the “Production Management Team” (PMT) which consisted of the team leader of the “Launch Pad” and “Customer Service and Shipping”, and the two primary Plant Managers needed to experience the HPT program before the end of the year.

The timing was tight and so the HPT program was redesigned for the PMT to be completed in 7 weeks instead of 14. A huge shout out goes to these four leaders because they dove headfirst into the program and with tremendous commitment to the process began to tackle their communication and collaboration struggles head on. New ways to have conversations with each other were developed based upon the individual and collective strengths of the team all the while seeking to respect one another. The results of this team beginning to work well together were very impressive. The month of December had traditionally been the slowest sales month of the year since the inception of the company. However, in December 2021 it was different as Dowding Industries marked an all-time high for sales in the history of the company.

Due in part to this remarkable achievement, executive leadership decided it was important for the PMT to continue their work together and start the 14-week High Performing Leader program (HPL) that included several “conversation” tools as well as one-on-one coaching. In addition, 10 Dowding employees were identified as “Emerging Leaders” and began the HPT program.

After completing four HPT programs and one HPL program by late spring of 2022, employees who were not a part of the HPT training began to ask about Clifton Strengths and if there was a way they could participate. This led to the creation of a Clifton Strengths bootcamp, which has trained 4 cohorts of 10 employees each, meeting 2 hours per month for 3 months. Out of this training, 4 additional employees have been identified as potential “Emerging Leaders” and will most likely begin #9 HPT next year. By the end of 2022, eight HPT programs and one HPL program will have been completed involving over 80 team members and leaders at Dowding Industries. Sales records have continued to be broken nearly every month since December 2022 and sales projections for 2023 are up 35%.

An important improvement is shown by the fact that employees know that open and honest communication is necessary to address frustrations, emotions, and relationship problems with their colleagues. They now know the importance of having a conversation and how it leads to a better and safer work environment for everyone.

Improving open communication also led to honest and open collaboration between supervisors and team members as they leveraged their strengths utilizing the HPT program through e2grow. In addition, the new “Emerging Leaders” are finding ways to bring a higher level of efficiency and effectiveness to the manufacturing process. Several of them collaborated to develop an alternative work schedule so employees would only have to work one weekend a month versus most weekends. The result is these “Emerging Leaders” developed and implemented a new schedule that brought about a greater level of satisfaction because employees could spend more time with their families on the weekends and the work of the company was still being completed.

This is but one example of the new, more collaborative working environment based upon the trust emerging from honest communication that has the potential to birth innovative approaches for the manufacturing processes of Dowding Industries.

While there is more work to do in 2023 communication in, among and between, employees, team leaders, supervisors, managers, and executive leadership is improving on a daily basis. Many individuals and teams are utilizing the e2grow concept of “aim and reflect” as well as the model for how to have high-level conversations that only the top 5% of leaders have. Teams are consistently becoming more efficient and effective as they use their strengths and leverage the strengths of other team members on a daily basis.

The impact Clifton strengths and e2grow’s HPT and HPL programs have had on Dowding Industries has been outstanding. Not only is employee retention up 19% and absenteeism down significantly for nearly two years, but next year's revenue is expected to be 35% higher than the current year. But even more important to them is the overall improvement in open communication and collaboration that's evident throughout the company and the sense of well-being and satisfaction among employees. The company is very appreciative of the impact upon their employees' personal growth, attitude and direction as they learn about and leverage their strengths in the workplace, as well as in life. This is clearly visible and noticeable when you walk through the company and talk to employees.

I just want you to know this has been a phenomenal work. I'm not really certain what has been done, but our employees are talking about it. There's just a different attitude around this place. I'm not real certain the specifics, but man, I'm seeing a difference. So thank you.

At Dowding Industries we have had several groups work with Bill and HPT and the results have consistently been remarkable! My teams all communicate far better and they are learning to leverage each other’s strengths. I would put the improvement in the teams’ performance from a 5 to a 9 on a scale of 1 to 10.

From perfectionist and opposing to constructive and supportive

University students improve their self-esteem, which leads to greater initiative, confidence, and well-being

Transforming the low self-esteem and uncertain future prospects of college graduates into an optimistic sense of self-worth, looking forward to the start of a new phase in their lives.
Read more